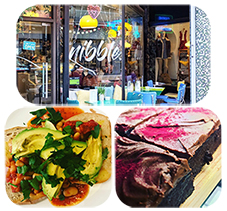 Seven months ago, Lauren Irlam, 29, took over a cafe on Oldham Street when it was called Blue Daisy. She has now renamed the venue 'Nibble' and put her own mark on it.

She started saving while working as manager of Tea Cup in the Northern Quarter and then the Railway Kitchen in Alderley Edge, and had planned to "save up for years". However, things happened a lot quicker than expected. "It happened in a flash, I got a loan and two weeks later I was in.”

The enterprising baker is living a dream come true, and she’s also planning to take her bake on the road to local markets in Manchester and Levenshulme.

“I would say half my menu is vegan or gluten-free to cater for the sort of people who live here and come to the area,” she said. “It has forced me to explore new things, which is great fun.”

We will sure be looking forward to seeing Lauren at our local Levy Market sometime soon!