Where will South Manchester property price be 2021 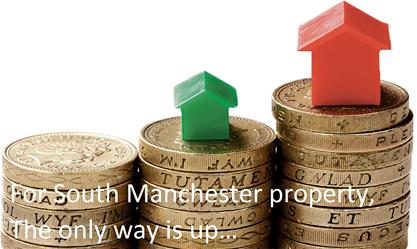 I was having lunch the other day at The Metropolitan on Burton Road in Didsbury, with a local Didsbury solicitor friend of mine, when the subject of property came up. She asked me my thoughts on the South Manchester property market for the next five years. Property prices are both a British national obsession and a key driver of the British consumer economy.  So what will happen next in the property market? So here is what I told her, and now wish to share with you.

Before I can predict what will happen over the next five years to South Manchester house prices, firstly I need to look at what has happen over the last five years.  One of the key drivers of the housing market and property values is unemployment (or lack of it), as that drives confidence and wage growth – key factors to whether people buy their first house, existing homeowners move up the property ladder and even buy to let landlords have an appetite to continue purchasing buy to let property.

As the South Manchester job market has improved with better job prospects, salaries are rising too, growing at their highest level since 2009, at 3.4% per year in the private sector (as recently reported by the ONS).  That is why, even with the turbulence of the last few years, property values in the South Manchester area are 16.3% higher today than they were five years ago.

Many home occupiers have held back moving house over the past seven to eight years following the Credit Crunch but with the outlook more optimistic, I expect at least some to seize the opportunity to move home, releasing pent up demand as well as putting more stock onto the market. With a more stable economy in the City, this will, I believe, drive a slow but clearly defined five year wave of activity in home sales and continued house price growth in burnage.

I forecast that the value of the average home

23.5% might sound optimistic to some, but according to Land Registry, values are currently rising in South Manchester at 6.1% year on year, I believe my forecast to be fair, reasonable and a reflection of both positive (and negative) aspects of the local property market and wider UK economy as whole.

However, it wouldn’t be correct not to mention those potential negative issues as I do have some slight concerns about the future of South Manchester housing market.  The number of properties for sale in South Manchester is lower than it was five years ago, restricting choice for buyers (yet the other side of the coin is that that keeps prices higher). Interest rates were being predicted to rise around Easter 2016, but now I think it will be nearer Christmas 2016 and finally the new buy to let taxation rules which are being introduced between 2017 and 2021 (although choosing the right sort of property / portfolio mix in Chelmsford will, I believe, mitigate those issues with the next taxation rules).

I am telling the landlords I speak to, that with interest rates at their current level 0.5%, the cash in your Building Society Passbook is going to grow so slowly that it might as well be kept under their bed. Property prices, by contrast, have rocketed over the years, even after the property crashes, far outstripping bank accounts and inflation.

So my final thought ...  property is a long term investment, it has its’ up and downs, but it has always outperformed, in the long term, most investments. Those in their 40’s and 50’s in South Manchester would be mad not to include property in their long term financial calculations. Just make sure you buy the right property, at the price in the right location. If you would like a chat about the current market or if you have a property to let and want some advice then please feel free to pop into the office to see me or give me a call.