Brexit and the Levenshulme and Burnage property market, 20% more properties for sale!

With the change in tax rules on second properties this years April Fools Day was no joke for some landlords, as they rushed their buy to let property purchases throughout late March to beat the extra 3% stamp duty George Osborne had imposed on buy to let properties after the 31st March 2016. Because some investors brought forward their 2016 property purchases to save the extra tax, speaking to fellow property professionals in South Manchester, all of us have noticed, since the clocks went forward, demand to buy in April and May from these landlords has eased.

Then we have the Brexit issue, which is also having a tempering effect on the Levenshulme and Burnage property market – although if you recall I wrote about this a few weeks ago, and whilst an exit will have an effect – it won’t be the end of the world scenario some commentators are suggesting. In another article I wrote previously, I spoke of the growth rate of Levenshulme and Burnage property values, and whilst the rate of growth is slowing, Levenshulme and Burnage property values are still 4.42% higher year on year, albeit the growth rate month on month has started to moderate when compared to the heady days of month on month rises of 2014 and 2015. Interestingly though, a very recent members survey of the Royal Institution of Chartered Surveyors states that only 17% of members believed property values would increase over the next quarter compared to 44% at the end of 2015.

All this had led to increase in the number of properties for sale in Levenshulme and Burnage, there were 208 properties for sale in the postcode in December (of which 36 came on to the market for the first time). In March, April and May, 206 properties came onto the market in the postcode district (or an average of 68 per month), meaning by end of May, there were 250 properties available for homeowners and landlords alike to buy in M19 (i.e. a rise of 20% more properties for sale). The reason this is important is because I expected the number to be slightly lower because of the normal Spring rush in the property market. Interestingly, these figures are mirrored in neighbouring postcodes. 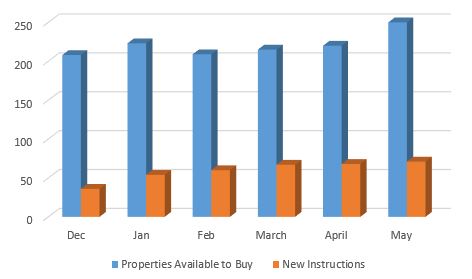 Nevertheless, I believe this easing of the Levenshulme and Burnage property market is a good thing, as investment landlords won’t have to pay top dollar to secure a property because of the lower competition. On the face of it, this easing should be bad news for the 6856 Levenshulme and Burnage homeowners, but nothing could be further from the truth. The majority of homeowners that move, move up market, (i.e. from a flat to terrace/town house, then a semi and then detached), so whilst last year you would have achieved a top dollar figure for your property, you would have had to have paid an even higher top dollar to secure the one you wanted to buy. The Swings and Roundabouts of the Levenshulme and Burnage Property Market!

However, all the signals suggest that whatever the aftermath of the approaching EU referendum, in the long term, the disparity between demand for Levenshulme and Burnage property and the supply (i.e. the number of actual properties) will still exercise a sturdy and definitive influence on the Levenshulme and Burnage property market. It would surprise me that if by 2021, whichever way we vote in late June, assuming we don’t have another credit crunch or issues like a major world conflict, property prices will be between 20% to 25% higher than they are today