Stockport Landlords and Tenants : What does the Tenant Fee Banning order mean for you?

With our new Chancellor of the Exchequer revealing a ban on tenant fees in his first Autumn Statement on Wednesday what does this actually mean for Stockport tenants and Stockport landlords?

The private rental sector in Stockport forms an important part of the Stockport housing market and the engagement from the chancellor in Wednesday’s Autumn Statement is a welcome sign that it is recognised as such. I have long supported the regulation of lettings agents which will ensconce and cement best practice across the rental industry and,  I believe that measures to improve the situation of tenants should be introduced in a way that supports the growing professionalism of the sector. Over the last few years, there has been an increasing number of regulations and legislation governing private renting and it is important that the role of qualified, well trained and regulated lettings agents is understood.

So, let’s look at tenants .. this is great news for them, isn’t it?  Well before you all crack open the Prosecco, read this …

Although I can see prohibiting letting agent fees being welcomed by Stockport tenants, at least in the short term, they won’t realise that it will rebound back on them.

First up, it will take between 12 and 18 months to ban fees, as consultation needs to take place, then it will take an Act of Parliament to implement the change. A prohibition on agent fees may preclude tenants from receiving an invoice at the start of the tenancy, but the unescapable outcome will be an increase in the proportion of costs which will be met by landlords, which in turn will be passed on to tenants through higher rents.

Published at the same time as the Autumn Statement, hidden in the Office for Budget Responsibility’s Economic and Fiscal Outlook on the Autumn Statement (The Office for Budget Responsibility being created by Government in 2010 to provide independent and authoritative analysis of the UK’s public finances), it said on Wednesday …

“The Government has also announced its intention to ban additional fees charged by private letting agents. Specific details about timing and implementation remain outstanding, so we have not adjusted our forecast. Nevertheless, it is possible that a ban on fees would be passed through to higher private rents”

The charity Shelter and Scotland

Scotland banned Letting Fees in 2012. The charity Shelter have been a big voice in persuading and lobbying the Government since it managed to persuade the Scottish Parliament to ban fees in 2012. On all the TV and radio shows at the moment, they keep talking about their Independent Research, which they said showed that,

“Many industry insiders had predicted that abolishing fees would impact on rents for tenants, but our research show that this hasn’t been the case. The evidence showed that landlords in Scotland were no more likely to have increased rents since 2012 than landlords elsewhere in the UK. It found that where rents had risen more in Scotland than in other comparable parts of the UK in 2013, it was explained by economic factors and not related to the clarification of the law on letting fees”

Only yesterday Shelter were quoting this Research from December 2013 to say rents never went up following the tenant fee ban in Q4 2012. I have read that research and I agree with that research, but it was published three years ago, only 12 months after the ban was put into place.

I find it strange they don’t seem to mention what has happened to rents in Scotland in  2014, 2015 and 2016 .. because that tells us a completely different story!

What really happened in Scotland to rents?

I have carried out my research up to the end of Q3 2016 and  this is the evidence I have found..

In Scotland, rents have risen, according the CityLets Index

(CityLets being the equivalent of Rightmove North of the Border – so they know their onions and have plenty of comparable evidence to back up their numbers).

When I compared the same time frame, using Office of National Statistics figures for the English Regions between 2012 and 2016, this is what has happened to rents 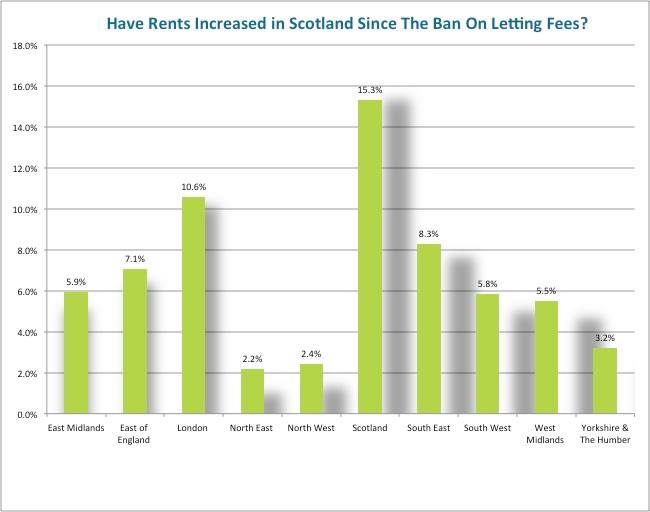 Are you really telling me the Scottish economy has outstripped London’s over the last 4 years? Is anyone suggesting Scottish wages and the Scottish Economy have boomed to such an extent in the last 4 years they are now the Powerhouse of the UK? .. because if they had, Nicola Sturgeon would have driven down the A1 within a blink of an eye, to demand immediate Independence.

So what will happen in the Stockport Rental Market in the Short term?

Well nothing will happen in the next 12 to 18 months .. it’s business as usual!

… and the long term?

Rents will increase as the fees tenants have previously paid will be passed onto Landlords in the coming few years. Not immediately .. but they will.

As a responsible letting agent, I have a business to run. It takes, according to ARLA, (Association of Residential Letting Agents) on average 17 hours work by a letting agent to get a tenant into a property. We need to complete a whole host of checks prescribed by the Government; including a right to rent check, Anti Money Laundering checks, Legionella Risk Assessments, Gas Safety checks, Affordability Checks, Credit Checks, Smoke Alarm checks, Construction (Design & Management) Regulations 2007 checks, compliance with the Landlord and Tenant Act, registering the deposit so the tenants deposit is safe and carry out references to ensure the tenant has been a good tenant in previous rented properties.

All of which the vast majority of lettings agents take very seriously and are expected to know inside out making us the experts in our field. Yes, there are some awful agents who ruin the reputation for others, but isn't that the case in most professions?

.. but business is business.

No landlord, no tenant and certainly no letting agent does work for free.

I, along with every other Stockport letting agent will have to consider passing some of that cost onto my landlords in the future. Now of course, landlords would also be able to offset higher letting charges against tax, but I (as I am sure they) wouldn’t want them out of pocket, even after the extra tax relief.

So what does this all mean for the future?

The current application fee for a single person at my lettings agency is £225 and for a couple £250 .. meaning on average, the fee is around £233 per property.

I am part of a Group of 500+ Letting Agents, and recently we had to poll to find the average length of tenancy in our respective agencies. The Government says its 4 years, whilst the actual figure was nearer one year and eleven months, so let’s round that up to two years.

That means £233 needs to found in additional fees to the landlord, on average, every two years.

Using the UK average management rates of 10% excluding VAT, this means the landlord will be paying £784.80 per annum in management fees.

If the landlord is expected to cover the cost of that additional £233 every two years, rents will only need to rise by an additional 2% a year after 2018, on top of what they have annually grown by in the last 5 years.

So, if that were to happen in Stockport, average rents would rise to £735 per month by 2022  (see the blue line on the graph) and so the landlord would pay £882 per annum in management fees .. which would go towards covering the additional costs without having to raise the level of fees. 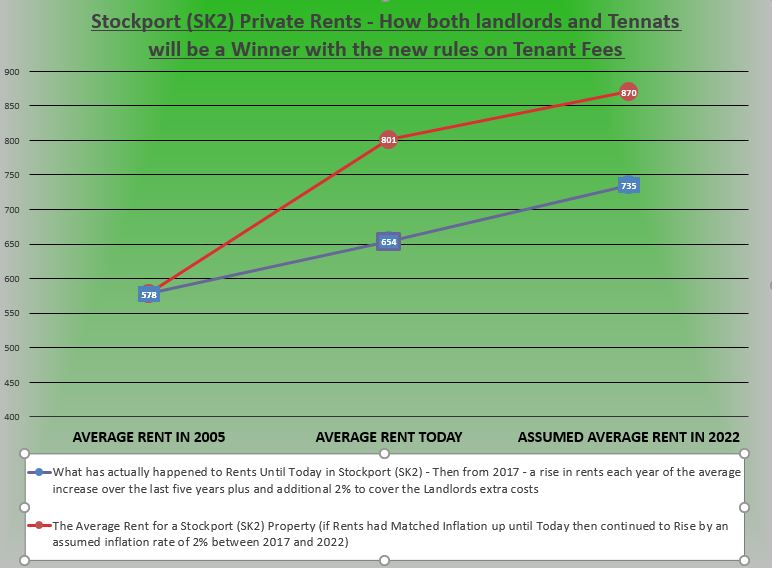 .. but that is bad news for Stockport Tenants?

Quite the opposite. Look at the red line on the graph). If the average rent Stockport tenants pay had risen in line with inflation since 2005, that £578 per month would have risen today to  an average of £801 per month. (Remember, the average today is only £654 per month) .. and even if inflation remains at 2% per year for the next six years, the average rent would be £870 per month by 2022 .. meaning even if landlords increase their rents to cover the costs tenants are still much better off, when we compare to the £735 per month figure to the £870 per month figure.

The banning of letting fees is good news for landlords, tenants and agents.

It removes the need for tenants to find lump sums of money when they move. That will mean tenants will have greater freedom to move home and still be better off in real terms compared to if rents had increased in line with inflation.

Landlords will be happy as their yield and return will increase with greater rents whilst not paying significantly more in fees to their lettings agency. Letting agents who used to charge fair application fees won’t be penalised as the rent rises will compensate them for any losses.

.. and the agents that charged the silly high application fees .. well that’s their problem. At least I know I can offer the same, if not a better service to both my landlords and tenants in the future in light of this announcement from Phillip Hammond.