Why you shouldn’t sell through an online Estate Agent 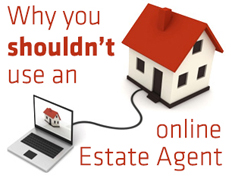 In the past few years there has been an influx of online estate agents who claim to sell your house for a lot less than a traditional estate agent. However, you need to be aware of services you aren't getting, or could end up paying more to get.

So, why shouldn’t you list your property with an online estate agent?

You pay before you sell.

With an online agent, you usually pay your fees up-front, whereas traditional agents don't get paid until your house sells. This means you take a risk with an online agent because you pay the money but could end up not selling your home.

The services won’t be the same.

Online agents brag about being a lot cheaper than traditional agents, whilst still offering local experts, but it isn't accurate. In fact, the National Trading Standards team has issued a warning to online agents.

James Munro, spokesman for National Trading Standards, in the Daily Mail says "It's wrong to make general claims about savings when the headline price does not include facilities normally included with traditional firms."

Use an online agent and your property listing may not have a sales board or floor plans, and you won't have professional help with photographs and viewings. To get these things with an online estate agent you often have to pay extra, which sometimes leads to paying more than you would with a traditional agent.

If you’ve never sold a home then you wouldn’t know that there is a lot of hard work involved after you've accepted an offer. A good estate agent will employ a 'sales progressor' whose sole aim is to move sales from the point where an offer is accepted to completion. You don't normally get that with an online agent, and would have to pay extra for it if it is available, and it shows in the stats. According to GetAgent.co.uk both eMoov and Tepilo only completed around half of their listings, but with a high street estate agent you’re guaranteed a completion.