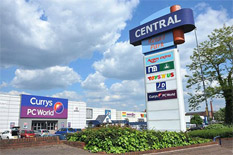 Manchester's Central Retail Park is to be developed into new homes as part of the council’s mammoth £1bn housebuilding partnership with City’s Middle Eastern owners.

A deal has been signed with owners TH Real Estate, and instead of original plans for a large supermarket, city centre apartments, townhouses and shops are most likely to be built, forming part of the Abu Dhabi United-funded housing project, the Manchester Life venture, which has already seen 300 homes built in nearby Ancoats and New Islington.

The town hall already owns the freehold on the retail park and has a 10-year deal with Abu Dhabi United Group, owned by Sheikh Mansour, and has been looking at options to revitalise the run-down park since 2005.

Over time, plans changed and were approved in 2013, for a new large-scale supermarket. However, in the years that followed the city’s economy shifted again, leading to discussions over how to create a ‘mixed use’ site, including housing.

The council is hoping that by the middle of next year there will be a definite plan for what will be built on the site.