Now the Christmas decorations are down and kids are back at school we can look at how the property market performed in 2017 in M19.

For many the market was busy and concerns raised in the press about the effect of Brexit on the market seemed unfounded locally. This is not a surprise as new build property or even space to build it are distinctly lacking within the area!

There was a total of 684 new properties coming to the market in the whole of 2017. August was the busiest month of the year for new instructions when 68 became available to buy. Surprisingly though, this is 8.5% less than 2016 when 747 new properties came to the market.

The most important thing for the majority of buyers and owners within the M19 postcode is usually the amount the property price has increased over the two years. This can also be narrowed down further when you compare the sold prices over the whole year by looking at the postcode sectors of M19 1, M19 2 and M19 3.

M19 1 outperformed M19 2 and M19 3 with an increase of 11.39% compared to 8.5% which is certainly a good sign. We have seen a noticeable difference in the type of buyers within the area and a shift from investors to first time buyers. 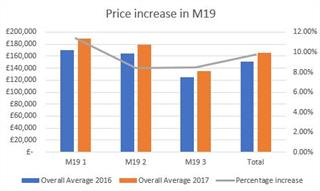 On the rental side there were 2367 listings on Rightmove for properties to let within Levenshulme and Burnage. Whilst this figure does seem high it is worth noting that some properties to let are marketed by more than one agent. 1193 properties were let out in 2017 in M19 which was very similar to the previous year.

It was noticeable that rental prices were not as buoyant in 2017 and the increases seen in 2016 were not repeated and rents remained static.